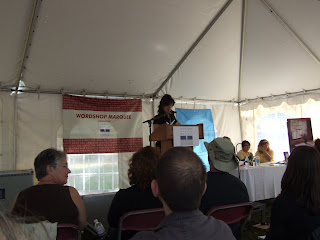 I just had a look at my mapping widget and I've had hits from two new places in Australia (East and West coasts) plus Japan, perhaps Tokyo. My map counter doesn't name names so I'm going by general area. I have also had over 4000 views now. Very gratifying. Guess I won't give up the blog just because my sabbatical is over, although keeping up the postings hasn't been easy.

Here then is my quick and dirty summary of Kim Moritsugu's writing talk from Word on the Street.

This picture of Kim Moritsugu at the Word on the Street, Wordshop Marquee. Her take on writing is unique. After many years in management, and numerous promotions, Moritsugu got her MBA. After reaching this goal, she realized she hated being a middle manager with the provincial lottery corporation. "Fuck the MBA," she said. When her branch was relocated, Moritsugu was able to stay behind in Toronto, receiving a severance cheque equivalent to a 1.5 year's salary.

She took the money and, with her children still in daycare, started writing and taking courses in earnest. Many years of discouragement ensued but Moritsugu was undeterred. Why? Working in the prize office for so many years had brought a daily stream of lottery winners to her door. It was a "culture of pure unbridled hope."

Somebody has to win, just as somebody has to get published. She kept sending her manuscripts out like lottery tickets. Moritsugu never gave up, even when her critique group, men who favoured violent and depressing topics, didn't 'get' her work. Moritsugu was writing a "frothy comedy of manners," set in a fashion magazine office.

After five years of writing, without publishing or encouraging feedback, Paul Quarrington, her mentor for a course at the Humber School for Writers said "I don't see why you're not published." It was all the encouragement she needed.

Her novel completed and polished, Moritsugu sent it to the big five Canadian publishers plus American agents. When these publishers turned her down or didn't respond, she tried smaller agents and smaller Canadian publishers. Her big break? Goose Lane called based on her chapter and outline. They wanted her to cut the novel by one third to 100 000 words and they wanted it in six weeks.

How did it change her life? At forty-one, she says, she had hit the jackpot, for writers -- publication. It didn't make her hugely famous, "but being published is better than not being published."

I think she was specifically talking about the Canadian publishing scene when she said "there's no money in writing fiction." It's a frequent complaint among Canadian writers but Kim Moritsugu isn't worried. If her husband's job stops paying, she "can always go out and buy a lottery ticket."

Word on the Street Clips

This gentleman offered to send me his latest book for reviewing and gave me a bookmark.


This eloquent lady expressed her preference for Victorian literature. She is also the one who coaxed me into the spontaneous poetic eruption contest, i.e. write a poem on the spot. I wasn't feeling particularly poetic but I forced myself. If I'm going to make my students write poems, I should be prepared to do the same.