Confession and The Evil Dead 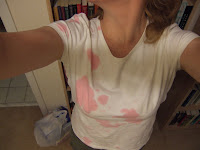 I admit it. As soon as I got back to Toronto, from vacation, I read the last Harry Potter in two days. I would have read it in one day if I weren't such an adequate parent.

Enough of that. Back to the law books and notebook. I should be writing.

With my sabbatical drawing to a close and the end of summer almost in sight, I do not expect to review many books for a while.

Instead, here's another confession. I liked Evil Dead: The Musical. It's a send up of 1980's horror movies and all their conventions. What a shock.

I never watched horror movies in high school. I thought I'd have to look away during the chainsaw scenes. Instead, they were funny. The choreography and songs were silly and fun and rude. Very entertaining. I sat in the blood splatter zone and left with my white t-shirt covered in (fake) blood. What an anniversary present!

It's nice to know that after 11 years of marriage, my husband still sometimes knows me better than I know myself.