As part of the ImagineNative festival, on Saturday I went to an excellent screenwriting seminar given by Elke Town of Storyworks, sponsored by the Harold Greenberg Fund. She was an excellent presenter and a good sport as well since she posed for this picture! 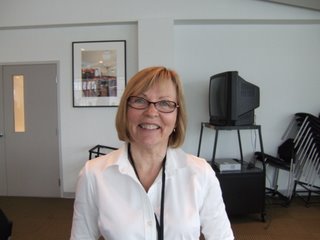 There was also a reading list, notes on structure and allusions to the harsh realities of trying to write a great screenplay. Hint: Your first draft may not be your last!

Town suggested we go to scriptfly to purchase screenplays in order to compare final scripts to DVDs of finished films.

After a very short break I attended a round-table discussion about moving from short to feature filmmaking. The speakers were generous with their experiences and opinions. 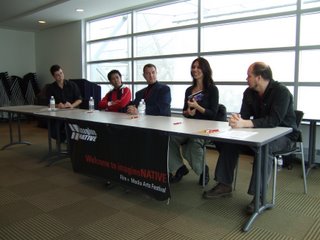 Craig gave a fascinating account of the cultural imperative for Canadians to tell their stories using government funding to create art. He emphasized making the right film for the right reasons. In Craig's opinion, in Canada it is comparatively easy to make a first feature film, but making a second feature is much harder. He recommends making many, many smaller films first and suggests that making a feature film need not necessarily be the ultimate goal.

Gail Maurice advised filmakers to trust their vision and just go do it. An all-round artist with experience acting and directing, she was enthusiastic and supportive. Why wait when you can make a film on your cell phone and post it on YouTube? No more excuses, folks.

Richard Story was very friendly when I spoke to him between presentations. His tip for independent filmakers and writers? Attend the monthly Trinity Square screenings to network with independent directors.

Balintagos had the saddest story. He modestly attributed his success in documentary, short film, music video and feature length formats to 'beginner's luck.'

When asked to name his biggest challenge, he said it came after his first feature film, The Blossoming of Maximo Oliveros, which won international awards and became a breakout commercial success in the Philippines.

No one involved in the project had expected to make much money, but once profit became involved, he found out not to trust deals made with a handshake between friends. Without wanting going into details, Balintagos concluded that he was happy to have won prize money because it allowed him to "survive."

More weekend than I probably deserve...

After the festival I went to write in the Reference Library, ate dinner with my hubby and friends, attended the opera and went to a tenth anniversary keg party featuring a 48 hour writing contest. I didn't win first prize but hey, I did win a CD and some delicious free trade coffee. I feel honoured to have such fun, creative friends.

Cosi Fan Tutte -- The COC kicks back in its new home

It was wonderful. I had a chance to look at the new home of the COC and hear a delightful opera. For me, the overture alone was worth the price of admission.

I enjoyed the saucy direction too. A campy interpretation of the wafter-thin plot is an ideal way to present this opera about worldly frivolity.